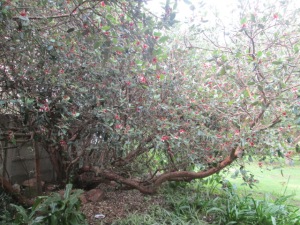 Four and a half weeks ago, I found Poopsie on the ground next to his dead sibling, they had been blown from their nest during a storm.  On the advice of our local vet I fed him ‘Hills Canine / Feline  Critical Care’ tinned food mixed with water successfully from a syringe, he grew and developed wonderfully. However I now realise that keeping a bird fed, warm and alive is not enough, the biggest challenge which I have not been able to overcome is weaning him.  10 days ago I released him into our garden when I felt confident that the feral cat had been absent for about a month.  Poopsie took up residence in a large bush outside our bedroom window, however he did not seem able to find his own food, I continued feeding him by syringe.  He flies to me from the high branches to be fed.  This morning I phoned Judy from Wildlife in Crisis in Springs and she told me that if I just stop feeding him he will starve, he does not know how to look after himself and is too dependent on me.  She offered to take him in, he will stay in an aviary with other Olive Thrushes who will teach him, when he is ready he will be released with them.

The day we found him 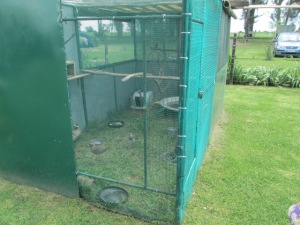 We have just returned home from dropping Poopsie at Wildlife in Crisis.   The rehabilitation centre is on a plot away from city life and it feels like the perfect setting for a bird to return to the wild.  I was filled with deep respect for Judy and her husband who are dedicated beyond words.  Judy was so lovely, she is sure that Poopsie will be independent within about a week.  He will learn how to feed himself from other birds in the aviary.  It was very sad to say goodbye and Fjord cried all the way home but at least we know that this is what is best for Poopsie.

Would I do this again?  I don’t know, raising a baby bird is a dawn to dusk commitment which I was willing to take on but what is best for the bird must always be taken into consideration.  I did not manage to wean him and this was a major stumbling block perhaps next time the best thing would be to take a baby bird straight to the people who know exactly what they are doing and what is best for the bird.  None the less Poopsie added to our lives and we will always be grateful for the privilege of him sharing a part of his life.